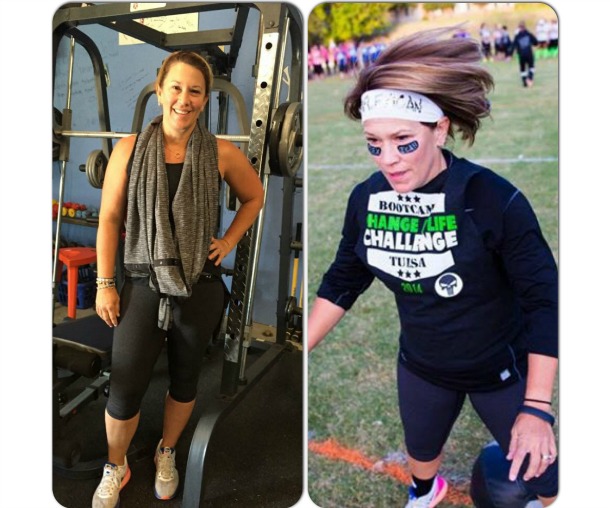 Paige McMurray had a NO EXCUSE November, and brings that NO EXCUSE to December. She is the busy mom of three active boys and was a collegiate athlete and former Women’s Tennis Coach at the University of Tulsa.

Paige found herself in a rut with the gym workout and lacked the enthusiasm and excitement she once had back when she was competing in college. Her boys are very involved in athletics and attend Coach JC’s Dynamic Sports Development program for athletes. Paige enjoyed seeing the intense, challenging programs that they were getting at DSD and really liked Coach Jaime’s philosophy and attitude. Her boys challenged her to try Bootcamp Tulsa to see if she could handle a Coach Jaime workout. Well, being the athlete she is, she couldn’t back down from a challenge!

Three months ago, Paige showed up for a free trial. She quickly realized that her gym workout was nothing in comparison to the training session on that first day. At our call up after the workout that day, she couldn’t stand. It was incredibly hot and the other ladies stood around and fanned her and made sure she had water. Everyone was telling her she did great, and that they all had a first day at some point. They told her it gets better and that they hoped she would come back. Of course she did!!! She said it showed her exactly what she needed to work on and being overheated, exhausted, and sore did not scare her off. It only fueled that athlete inside her to push on and accept that challenge fully that her sons had given her.

Paige said, “After two ACL reconstructions I no longer felt like an athlete and hated that feeling. BcT makes me feel like an athlete again which something I really love and has always been a part of my life. I truly have enjoyed meeting new people and making new friends. Everyone works as hard as they can, and that makes me feel like I am on a team again. Coach Jaime has a special way of making every single workout different and challenging, which makes BcT so much better for me than going to the gym and doing the same thing all the time. I love it!”

Paige says that in the three months she has been at BcT she has already seen a difference in her strength and her knees are so much stronger as well.

At the end of the workout, Coach Jaime gives a pep talk about fitness goals, nutrition goals, and honestly how to be a better person in life in general. He always makes sure the ladies’ attitudes are right and that they bring each other up and dominate in every aspect of their lives….physically, spiritually, emotionally, etc.

Paige, we love having an athlete of your caliber and mentality as part of the South Tulsa BcT family! We can’t wait to see where this next year takes you!