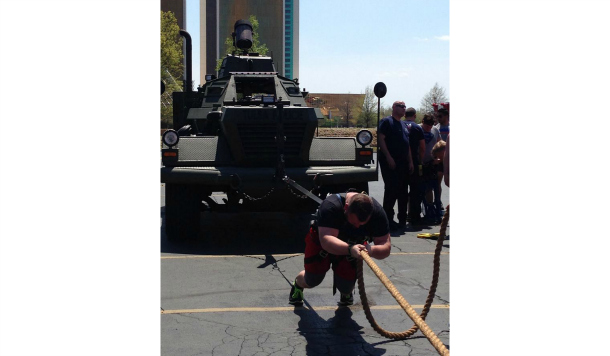 John Ide, a dedicated DSD STRONGman, has been coming to DSD for about 8 months and loves every minute of it. John’s personal motivation isn’t what keeps him coming back.

“What keeps me coming back is that I am never satisfied with what I have at the moment. Coming in each and every time lets me push to the next level and reach for new goals,” said John.

Not only does John love the workout he endures while at DSD, but his favorite aspect is the environment and the people he is surrounded by. During his time at DSD, he has also learned a few important things that will stick with him.

“My favorite aspect is the team environment. I come from a team sports background and I love to come in and work with the guys that give me that extra energy and motivation,” said John. “Along with my favorite aspects, I have also learned that it is a daily and long term grind. Things don’t come to you overnight. You have to commit every day to excellence and it will come in time.”

Since starting, John has received physical and emotional results and has some words for those younger athletes that also want to get the same results from DSD.

“There is a long road ahead, so set goals and work everyday toward them. It can be easy to slack and say you will do it later. However, that day will come and you will not be ready if the work has not been put in,” said John.

And for those who have read about DSD and are interested, John has some encouraging words for them that he has picked up along his journey there.

“No matter what age, it is never too late to start improving yourself. I have seen so many amazing transformations while at DSD. Whether it be young or old, the common denominator is having the will and the courage to take that first step,” said John.

“Nothing is impossible if you work hard and surround yourself with excellence; and as always ‘may the gains be with you’.”