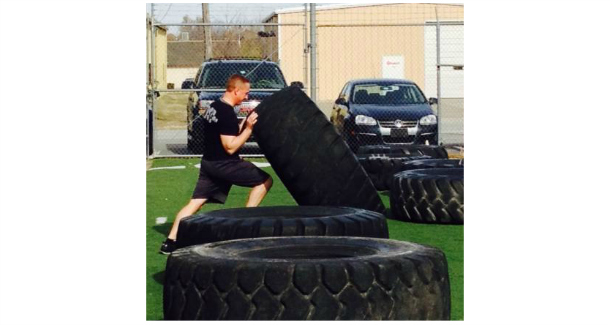 Becoming a DSD STRONGman is always a challenge, unless you really put your mind to it like Reggie Ripple. Reggie Ripple, 40-years-old, has been coming to DSD since February 2013 and still enjoys every minute of it because of the results he’s receiving.

“What keeps me coming back is the results I see and I feel. I believe I’m in as good as shape at the age of 40 as I was at the peak of my college athletic career 2o years ago. The addicting rush you get at the end of each workout knowing you put in the work,” said Reggie.

DSD is there to push people to the best of their ability, but also is there to build friendships with the people you are working out with so they can also hold you accountable for your workouts.

“My favorite aspect is the relationships/brotherly bond that have been created which results in accountability, trust, motivation and friendly competition to keep pushing to achieve goals and get better,” said Reggie, Director of Home Care service for St. John Health System.

DSD is place where you learn something new everyday whether it’s about your body or new workouts. For Reggie, his favorite thing about DSD happens to be learning that he is able to push himself beyond his limits.

“The single most important thing that I have learned is that pushing yourself beyond limits you didn’t think was possible is actually fun and very rewarding,” said Reggie. “Age is just an excuse to not get off the couch and get in the best shape of your life.”

After being at DSD for a year, Reggie has realized what it takes to keep the motivation up and how to keep yourself dedicated to becoming a STRONGman.

“One must give DSD 3x/wk. for one month minimal to make a decision if it is for them; try to only focus on your progress and not get caught-up comparing your gains to others,” said Reggie.