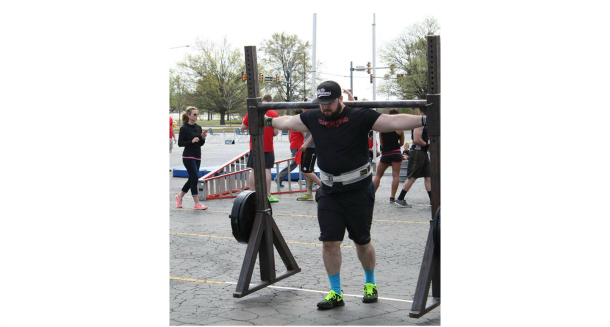 Walking through the doors of Dynamic Sports Development (DSD) will take you into a whole other world. For Strongman Jeremiah Duda, that world and culture is unlike anything he has ever experienced.

“As soon as you walk in, there is a demand for hard work and excellence that is simply overwhelming,” said Jeremiah, a 27-year-old Customer Service Manager. “Bad days and crummy attitudes die quick deaths under the weight of the culture here. You are hard pressed to make it 2 minutes at DSD without somebody yelling an encouraging greeting at you with a smile.”

This unique culture and intensity is felt by all the athletes, Strongmen and coaches at DSD. Everyone is committed to their own personal goals and is pushing and encouraging everyone else alongside them to meet their goals as well.

“You know that feeling you get at the edge of a drop off on a roller coaster?” said Jeremiah. “It’s that intense feeling that the coaching staff at DSD have really refined and perfected. They challenge you to dominate your day and accept no excuses! No matter what you are doing inside this building, you are completely engulfed in the culture and can’t help but carry it everywhere else you go. It becomes a part of who you are. It’s a culture of hard work, excellence, and a demand to WIN ALL DAY, EVERY DAY!”

Jeremiah first came to DSD 9 months ago, with a shoulder injury. He was convinced he would never be able to bench press more than 135lbs. Last month he made 305lbs fly off his chest like it was nothing. He’s also reached and surpassed a personal goal of dead lifting 500lbs by 2015. This May he ripped 550lbs right off the floor.

“One of my defining moments at DSD was when I first tested out on DeadLift to set a PR – I wanted 400lbs!” said Jeremiah. “And 400lbs was easy. Coach Jamie walked up to me while I was taking off my belt and said ‘What are you doing?? Get back there and put more weight on the bar!’ This continued two more times and then for the last time he walked up to me and told me ‘You don’t get to look to the right or to the left, you don’t get to think about how much weight this is. The ONLY thing you get to think about is – IT’S JUST A BAR. Now lets go to war! Go over there and rip that thing off the ground!'”

“I walked up to the bar and didn’t look to my right or left,” said Jeremiah.  “i just looked down and thought it’s just a bar. I reached down, set my hands, and ripped 475lbs off the ground. I would have called anyone crazy for telling me I could lift over 400 lbs on dead lift, much less 475! But my coach knew and saw something in me that I couldn’t see! And he got so far into my head to help pull that potential out of me, that it was an experience I really can’t put into words – you just had to be there. And add the eruption of cheers from my fellow Strongmen when I nailed the lift… it just put the experience over the top. And my story about limitations is just one of dozens you’ll find within the world-class athletes and DSDStrongmen that train here at DSD.”

For those thinking of joining the DSD community, Jeremiah wants them to know that it’s incredibly hard work, and there will be days you’ve wondered what you’ve gotten yourself into. But at the end of the day- you’re worth it!

“DSD is an investment in yourself that goes far beyond just the health and physical benefits of training,” said Jeremiah. “And whether you believe it or not, you were created with a purpose for greatness and DSD can help you in that journey to fulfill your purpose. You will accomplish things you never ever thought possible. I promise you- you are worth it!”