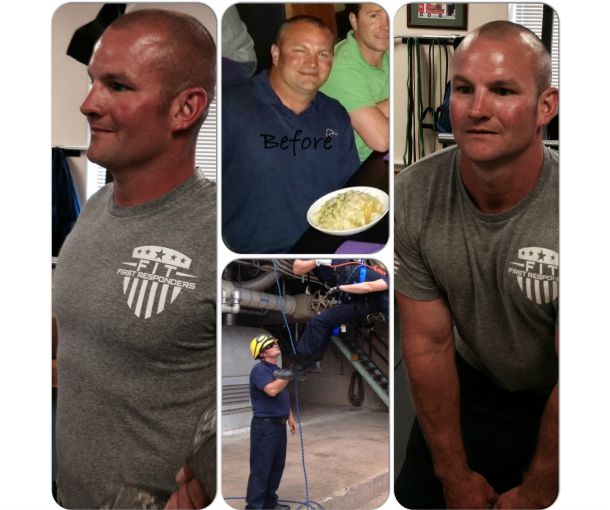 Darin Detherow is 34 years old and has been a firefighter for the City of Tulsa for eleven years. He began Fit First Responders in the Spring.

Darin’s favorite aspect of FFR would definitely have to be the atmosphere. He says, “The amount of positive energy the coaches and fellow FFR members bring with every workout is second to none. Even in the wee hours of the morning they inspire me to push myself to give 100% effort 100% of the time.” For Darin, this is what sets this program apart from others for him. Could he do these workouts on his own?….maybe. Would he do them on his own and at the intensity needed to produce the results he is seeing in this short amount of time?….absolutely not!

It is not just workouts that keep Darin coming back. He says, “This program has undoubtedly transformed my way of thinking for the better. It has made me analyze every aspect of my life and allowed me to see what negative things I can do without.” At the 15 week mid-point check in of the program, Darin lost 42 pounds, 10% body fat, and 7 inches from his waist. He quit chewing tobacco after 23 years…23 YEARS!!! He is no longer a slave to fast food. He is stronger than he has ever been and has more energy than he has had in a long time. His endurance and stamina are increasing daily. He has even logged 120 miles running since May 26th above and beyond FFR workouts.

All of these things are huge steps in the right direction to living a fuller and happier life. Darin adds, “But forget all of that. What I am most proud of are the little WINS with my kids and wife at home.” You see, besides being firefighters, most of the firefighters work a second job in order to pay the bills. Darin mows lawns on his days off. So after working a 24-hour shift at the fire station, he mows lawns outside in the heat for 6 – 7 hours before he goes home. In years past, he would be so tired all he would want to do is go home, shower, and lie on the couch to recover. Now, he goes outside and jumps on the trampoline or pushes his kids on the swing, sometimes until dark. He says, “Let me tell you, when your two year old son goes from wanting little to do with you because you were too busy or too exhausted to play with him before I began this program, to now grabbing your hand and telling you that you are his best friend…..it makes all of this effort worth while!”

Darin sees this program as infectious. He says, “Now that my mindset has changed, I can see the positive effects spreading like wildfire to other people in my life.” His wife has lost 24 lbs in the last 10 weeks. His brother, two other friends, and Darin now meet on the weekends to workout together. He says, “It just seems the more I better myself, the more everyone around me wants to do the same” Darin is happy and proud that he obtained his original 25 week weight loss and running goals in 15 weeks. But now those aren’t enough. He is not satisfied. He doesn’t know that he can ever be satisfied. He explains, “Improving myself physically, mentally, and financially has now become an OBSESSION! An obsession that I love.”

Darin would tell someone thinking of starting FFR to go for it. It has been a game changer for him. He has definitely caught the workout bug again and is excited to see what the next 8 weeks have in store.