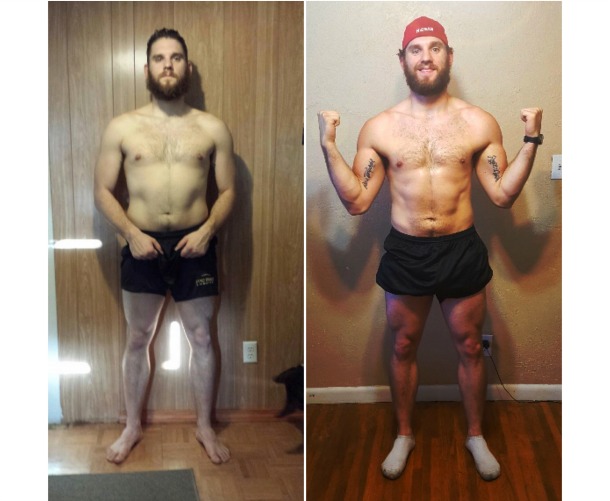 Richard Hopper had worked out on and off for months prior to joining Strong Men. He did not have a set schedule or really a schedule at all.

Since joining Strong Men, Richard has seen incredible results in his weight and strength. He has lost 20+ pounds and increased all his lifts by 1.5 to 3 times what they were when he first began. As for his mental results, Richard explains, “My outlook on my goals and dreams shifted 360 Degrees, dark to light, negative to positive. Spiritually, Richard and his wife have started going back to church and continued their walk with God, because of the positivity of the program.

As for relationships, Richard says, “ I have been dragging and pulling everyone around me to become the best they can be in their dreams and aspirations. The weak and uncommitted have and will fall. The rest will become the best.”

Richards finds he works harder than he would ever workout by himself. He explains, “I like to say someone else can push me harder than I can push myself. It has allowed me to have that effect on others. It has created a better workout time for me outside of DSD as well. There is an amazing environment, positive and reinforcing, with a great family oriented atmosphere.”

When Richard first started he was driven and motivated, but in a dark way. He was “angry at the world” for the things that had just happened in his life at the time, about a year ago now. He now says, “Since then I am still a very driven and motivated athlete but in a positive way. It has overall complimented my new mental mindset, on my road to my dreams. I have never felt better. Now I KNOW I will become GREAT! I will do whatever it takes.”

Richard would advise someone considering Strong Men to stay motivated. He adds, “Listen to positive speeches, watch motivational movies or read an inspiring story. Whatever you need to do, and works for you to keep going. Also the way you do one thing is the way you do all things. It’s not over until you WIN!”

Here are my favorite quotes that keep me driven:

“True desire in the heart for anything good is God’s proof to you sent beforehand to indicate that it’s yours already.” – Denzel Washington